WHY YOU NEED TO RUN THE LJUBLJANA MARATHON

The 24th Ljubljana marathon was held on Sunday, 27 October in Slovenia’s capital. Like in the previous years, the marathon once again proved it deserved the name of one of the most beautiful marathons in the region, and we can safely say in Europe, too. This is why our SVRNM team included it in the list of marathon races we ran in 2019.

After the marathons in Belgrade, Valjevo, Kragujevac, Banja Luka, Bucharest, Zagreb, Lisbon, it was Ljubljana’s turn. The city of dragons that charms you at first encounter with its peace and positive atmosphere was an excellent host to thousands of runners who decided on one of the races - 10k, half-marathon or marathon. Our team was comprised of 19 members - four men and women who ran the 10k, 14 half-marathoners and one marathoner. The adventure began on Friday, as we set out to Ljubljana late in the afternoon. It continued the next day, with a visit to the famous Running Expo where we picked up our bibs and enjoyed the diverse range of products offered by the top running brands. The euphoria that would culminate the next day, on the day of the marathon, was already in the air. The children’s run and Fancy-Dress Race were held on Saturday, 26 October and Ljubljana was already colored in all running colors. We were completely immersed in this atmosphere and woke up on marathon day eager and ready.

The first race, the 10k, started at 8:30, while the half-marathon and marathon were scheduled to start at 10:30. From the start to the finish, the streets of Ljubljana were lined with fans cheering the runners to endure. The little children, which fill you up with additional energy, people applauding, singing, not letting you give up, a route that lets you get to know Ljubljana from a completely different angle and phenomenal organization - all this helps you run your race with ease. And what do the runners say? 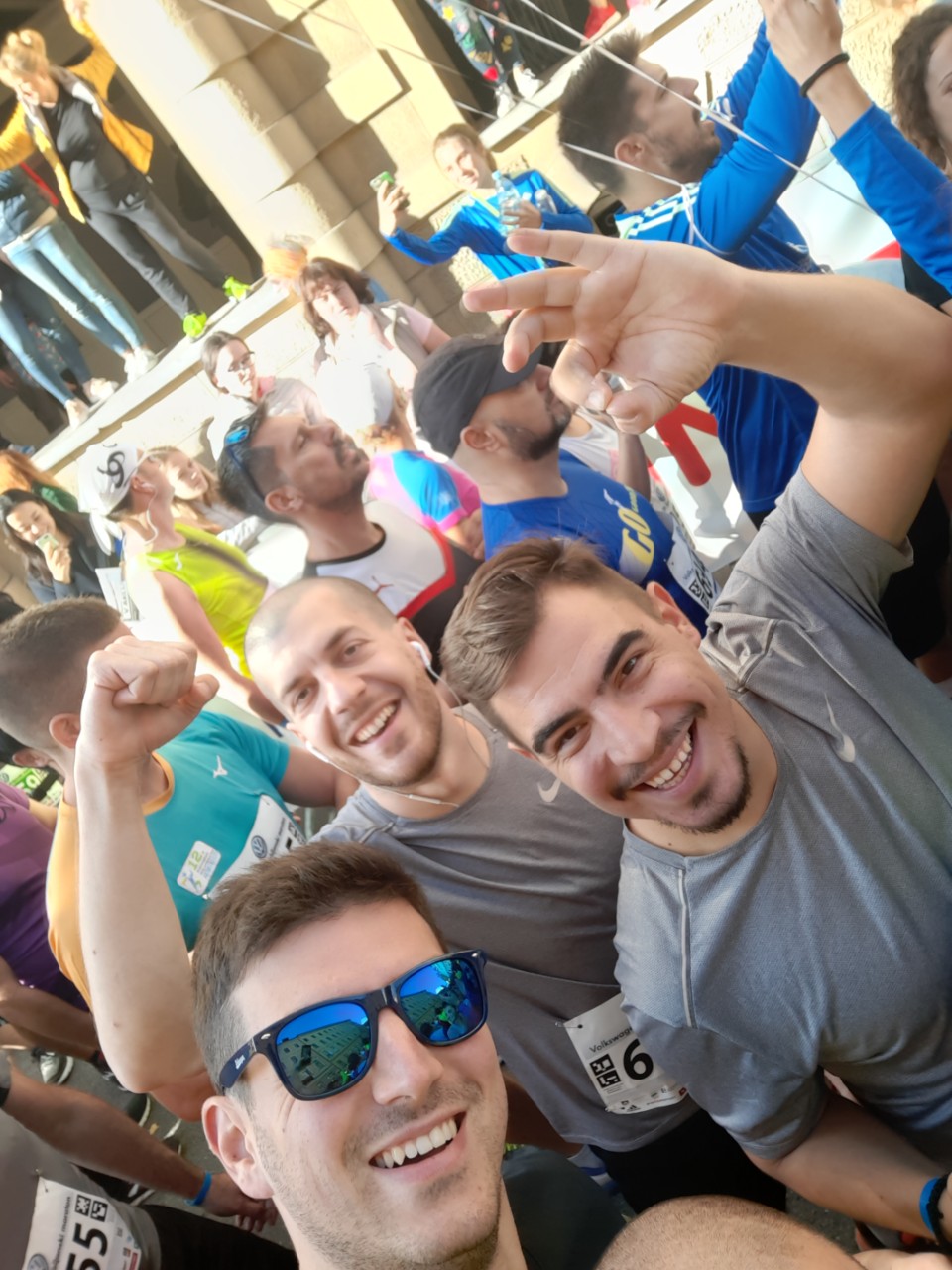 “Why would anyone want to run a half-marathon and bring their body to the limits of pain and endurance?” You start your easy morning walk with your friends. You notice more and more people around you speaking different languages. Something unusual is happening. You look in confusion, left, right and you see that other members of your team are doing the same. As the crowd gets denser, you understand what it is that makes the difference. Everyone is laughing, moving funny, lifting their arms up, jumping around and behaving like children. There are no differences, nations, races, everyone is the same crowd, the same collective. You reach the thickest crowd at the starting zone. You can feel the positive energy and enthusiasm of the runners, as well as the heartfelt support from the audience around you. The adrenalin peaks. Suddenly, there’s silence, the gun goes off, there’s an applause and the race starts. All your workouts, all the kilometers you’ve run, hours of sacrifice and planning suddenly get their meaning. When you have lived through this, you will know why you should run the Ljubljana marathon.” Filip

“Last year in Ljubljana, I ran the 10 k and I decided I would run the half-marathon. Ever since then I knew I would run two half-marathons this year - in Belgrade and Ljubljana. Why? In addition to the atmosphere, the audience and our phenomenal team, what happened on the track last year helped me make this decision. Mothers running, pushing their babies in strollers, a blind man who ran 21 km with a guide, but also another who ran 42 km with his seeing-eye dog. This year, one of the marathoners collapsed and the nurses carried him to the finish line, so he would finish. A mother ran 10 k with her sick son, holding his hand the entire time. Several runners were pushing people in wheelchairs... There is no age difference and the entire atmosphere and support bring you to the edge of tears. Of course, the SVRNM team added to that energy.” Smi

“When I started running half-marathons, I heard from several runners that Ljubljana marathon is recognized by the IAAF (International Athletics Associations Federation) and that I must run it at least once. I was told: “PAY ATTENTION TO THE FANS, THE TIVOLI PARK AND REFRESHMENT STATIONS. THIS IS WHAT MAKES PEOPLE RETURN TO LJUBLJANA.” I went, I finished in 1h 42 minutes (if anyone cares) and came back full of impressions. After that, I started thinking about a marathon. To run, you must have the wind in your sails, as I had. I’d like to thank the SVRNM team for their support and the awesome time we spent together. You get credit for half of my medal.” Miljan 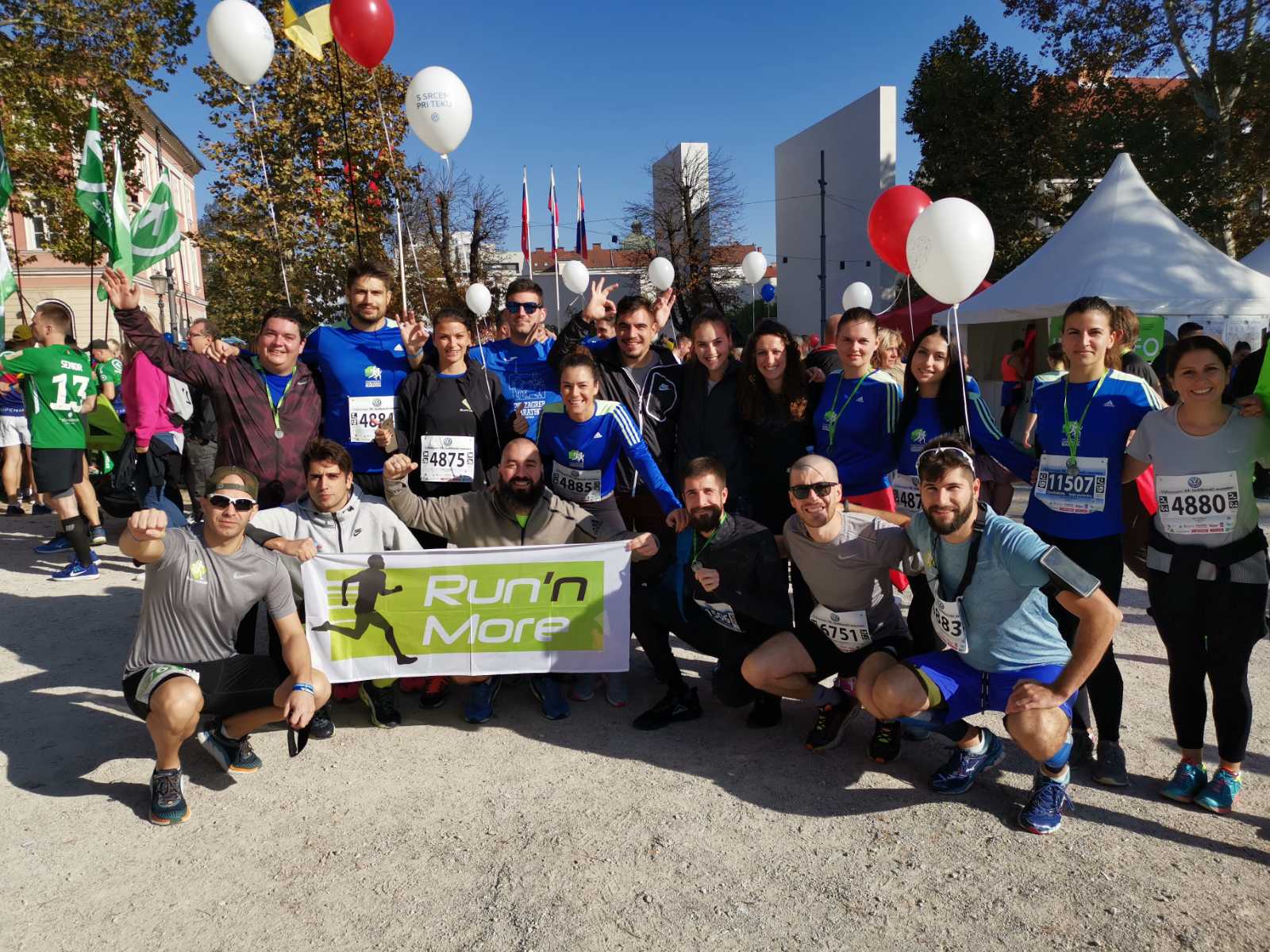 “Why should you run the Ljubljana? Because Ljubljana has the best fans that provide the best motivation and make each of your steps easier. I ran from Bucharest to Lisbon, but Ljubljana audience gets top place.” Igor

“Marathon as marathon is just a word, if you are not with the right crew and you don’t have the right hosts. It doesn’t do it justice to say that the atmosphere during the race was incredible! People cheering, singing, applauding, jumping as if every runner was Bolt. Excellent organization and an excellent SVRNM team have made another Ljubljana marathon a grand thing to remember.” Andjela

Finally, all runners are winners, as despite the final results, they have once more scored a victory against themselves. And we say BRAVOOOO to our 10 k runners - Marko, Sanja, Milica and Dzoni; half-marathoners - Milos, Smi, Fica, Nesa, Rista, Boka, Sanja, Jasna, Lili, Igor, Mijusko, Andja, Sone and Sloba; and the BIGGEST BRAVO to our marathoner, Miljan.